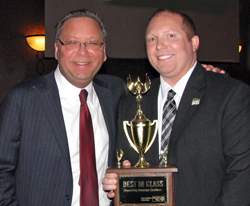 The Heart of Illinois United Way celebrated the results of its 2015 Campaign on Thursday, February 4. Campaign Chairs, Tana and Kent Utley announced a grand total of $11,631,648, representing an approximate 2 percent increase over 2014.

Each year, more than 300 local companies and organizations participate in the annual campaign. In 2015, a $265,000 Challenge Grant, sponsored by Caterpillar Inc., CEFCU and UnityPoint Health-Peoria, matched new or increased contributions expanding the Heart of Illinois United Way’s base of support. For this past campaign, there were 12 new corporate gifts and 18 new employee campaigns; 26 organizations increased their contributions to the United Way by 10 percent or more.

“Of the largest 100 United Ways across the country, the Heart of Illinois United Way is the fastest growing in the last 10 years. Since 2004, our annual campaign has increased 82 percent compared to other United Ways across the country that realized an average 2 percent decrease over the same period of time. Our growth is a result of the hard work and effort put forth by all of our volunteers, as well as the unwavering support of so many donors in our community who know that investing in our mission provides the best return on their charitable contribution,” Michael Stephan, Heart of Illinois United Way President, said.

The Best in Class Award is based on employee participation in the workplace campaign, per capita giving and overall percent increase in contributions. This award recognizes a local organization who continuously demonstrates campaign excellence from year to year. The 2015 Best in Class Award winner is Commerce Bank. 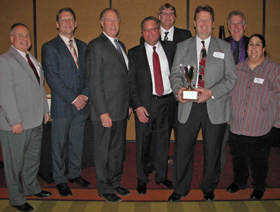 A few highlights from the 2015 Campaign include:

The Heart of Illinois United Way changes lives and improves our community by mobilizing people and resources to positively impact the areas of education, income and health for the
people of central Illinois. The demand for United Way funded programs continues to increase…

The 2016 Heart of Illinois United Way Campaign will be chaired by Tom Jenkins and Katie McCord Jenkins (Illinois Mutual).