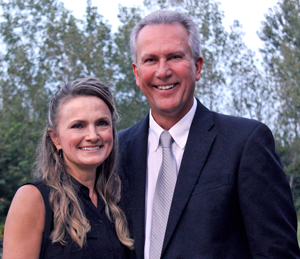 In 2007, the Heart of Illinois United Way established an annual Tocqueville Society award entitled Philanthropists of the Year. This award recognizes members of the United Way’s Tocqueville Society who are committed to the health and well-being of central Illinois. It honors individuals or couples for their leadership, dedication, and inspiration in creating a lasting positive impact on the quality of life in our community.

The Philanthropists of the Year award is announced at the Tocqueville Society Reception held each fall. This year’s reception was held at the home of David and Dawn Bozeman on Thursday, September 15th. Among a beautiful outdoor setting of fountains, flowers, and wonderful jazz music provided by Preston Jackson and Friends, the 2016 Philanthropists of the Year award was presented to Bernie and Teresa Koch.

Bernie and Teresa are two very special, active, and committed supporters of the Heart of Illinois United Way. Together, they have given generously of their time, talents and treasure. They have donated countless hours as members of the United Way Board of Directors, 2014 Campaign Chairs, Pillars Society Chairs, campaign cabinet members, and Teresa chaired the inaugural Power of the Purse fundraiser in 2014. She has also agreed to lead the new United Way women’s initiative, Women United.

When presented with the award, the Kochs humbly accepted the honor on behalf of all those in attendance who have also given, and continue to give, tirelessly of their time, talents, and resources. They highlighted the collective generosity of the Tocqueville Society and Pillars Society members as one of the reasons Peoria is known as one of the most giving communities in Illinois. They expressed appreciation to the Heart of Illinois United Way for being responsible stewards of donations received, as well as their confidence in the accountability and outcomes of dollars invested.

Congratulations to Bernie and Teresa Koch who join the following illustrious group of past Philanthropists of the Year.